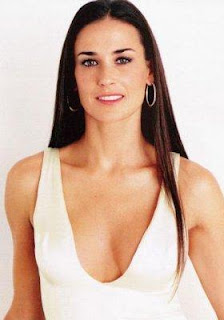 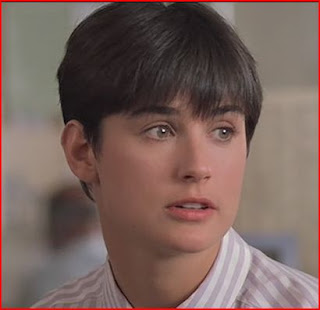 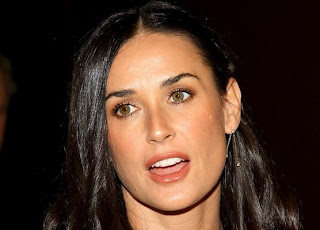 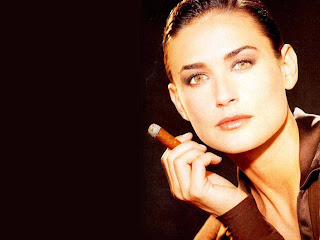 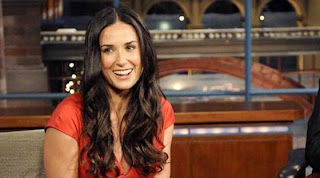 Actress, producer, director. Born Demetria Guynes on November 11, 1962, in Roswell, New Mexico. With her trademark husky voice and striking beauty, Demi Moore established herself as one of the leading actresses of the early 1990s. She had a challenging childhood. Her parents split up before she was born, and she was raised by her mother and stepfather, Virginia and Danny Guynes, both of whom drank heavily.

Moore had moved more than 30 times by the time she turned 14, eventually settling in Los Angeles. Moore later explained in Interview magazine that "By moving around a lot, I learned to assimilate into whatever new surroundings I had and to become very comfortable with people quickly. I think that was one of the strongest contributing factors to my becoming an actor."

Dropping out of high school at 16, Moore worked as a debt collector for a time and tried modeling. She also developed an interest in acting. In 1981, Moore had landed a role on the popular television soap opera General Hospital. She played journalist Jackie Templeton for two years. That same year, Moore made her film debut in the independent drama Choices.

During her stint on General Hospital, Moore found time for a few film projects. She appeared in the 3-D science fiction horror flick Parasite (1982) with her musician husband Freddie Moore, who she married the previous year. Moore also had a bit part in the soap opera spoof Young Doctors in Love (1982).

After leaving her soap opera role, Moore struggled to build a career in film. She played Michael Caine's daughter in Blame it on Rio (1984), which attracted little attention from critics or movie-goers. Taking on a leading role, Moore played Jon Cryer's love interest in No Small Affair (1984), but she did not really capture the public's attention until her performance in St. Elmo's Fire (1985). This film told the story of a group of friends as they confront post-college life. The cast also included a number of other young stars on the rise, such as Rob Lowe, Andrew McCarthy, Judd Nelson, Ally Sheedy, and Emilio Estevez. Many of these performers were becoming equally famous for their off-screen antics and partying lifestyle, earning them the nickname "the Brat Pack" by the media.

In her personal life, Moore divorced her first husband in 1984. She started dating Emilio Estevez, and the two became engaged in 1985. The couple starred together in 1986's Wisdom, which Estevez also wrote and directed. That same year, Moore starred opposite Rob Lowe in About Last Night, a look at young singletons in Chicago. Critic Roger Ebert praised both of their performances, saying the film "gives them the best acting opportunities either one has ever had, and they make the most of them." He also singled out Moore, writing that she "is especially impressive. There isn't a romantic note she isn't required to play in this movie, and she plays them all flawlessly."


Again playing the love interest, Moore co-starred with John Cusack in the popular comedy One Crazy Summer (1986). She was working steadily, but had yet to score a big, box-office hit. In 1987, she and Estevez broke up, and Moore later met actor Bruce Willis, who was then on the popular television show Moonlighting with Cybill Shepherd. The two began dating and got married in November of 1987 in Las Vegas. They welcomed their first child together, a daughter named Rumer, in 1988. She was named after the British writer Rumer Godden.

That same year, Moore returned to the big screen with The Seventh Sign, an apocalyptic thriller. She played a pregnant woman trying to stop the end of the world. Despite a few positive reviews for her performance in it, the film only earned about $16 million at the box office. Moore took on lighter fare with her next effort, 1989's We're No Angels, which starred Robert De Niro and Sean Penn. Despite its impressive cast, the film did not fare well with audiences.

Moore's biggest career breakthrough came in 1990 with the romantic drama Ghost. She played Molly, a young woman whose husband Sam (played by Patrick Swayze) was murdered. His spirit works with a psychic (played by Whoopi Goldberg) to avenge his death and to protect Molly from those involved. Showing an impressive amount of vulnerability on screen, Moore earned praise for her work on the film, which became a huge hit. Ghost brought in approximately $218 million at the box office and earned five Academy Award nominations.

Her next two films, Nothing But Trouble (1991) and The Butcher's Wife (1991), showed off Moore's comedic side. They both, however, failed to attract much of an audience. That same year, Moore became the talk of the nation with her controversial Vanity Fair cover. She was in the midst of her second pregnancy when she posed in the nude for the magazine's cover. While surprised by the dramatic response to the image, Moore also saw the cover as a chance to challenge perceptions about women and pregnancy. "People in this country don't want to embrace motherhood and sensuality. . . . You're either sexy, or you're a mother. I didn't want to have to choose," she told Interview magazine. Not too long after that issue appeared on newsstands, Moore and Willis celebrated the birth of their second daughter Scout.

Co-starring with Tom Cruise, Moore played a tough navy lawyer in the smash hit A Few Good Men (1992). She continued to prosper commercially with Indecent Proposal (1993). In the film, she and Woody Harrelson play a married couple in financial trouble who travel to Las Vegas to gamble their way back to solvency. They, however, end up losing their money and befriending a lonely billionaire (played by Robert Redford). He offers the desperate couple $1 million for the opportunity to sleep with Moore's character. While reviews were mixed, the film brought in a respectable $104 million at the box office.

Moore had her third child with Willis in 1994, a daughter named Tallulah. That same year, she starred opposite Michael Douglas in the box office hit Disclosure. Moore played a top executive who sexually harasses Douglas's character. In an interview for Entertainment Weekly, she explained why she took the controversial role. "I'd never played a villain before so that was attractive to me,"she said. The part was exceedingly challenging for Moore, explaining that she was a "wreck" during filming. "I've never showed up for a show where I literally started shaking before every scene. I've never stepped into someone who's so cunning — she's just really scary."

In 1995, Moore made movie history when she became the highest paid actress at the time — netting a $12.5 million payday for Striptease (1996). The film is about a single mother who works as a stripper to earn money to fight her ex-husband for custody of their daughter (played by Moore's real-life daughter Rumer). The film proved to be a commercial and critical disappointment.

Moore faced more personal challenges around this time. Her estranged mother was diagnosed with brain cancer in 1997, and the mother and daughter finally reunited. Moore stayed with her mother for the final months of her life. Virginia Guynes succumbed to her disease in July 1998. At the same time, Moore had to cope with another loss. She and Willis announced their separation after more than 10 years of marriage, just days before Guynes's passing.

Around this time, Moore also continued to struggle professionally. She starred in 1997's G.I. Jane as the first woman to attempt to join the elite Navy Seals military unit. For her role Moore trained vigorously, lifting weights for two hours a day and going for six-mile runs. She even shaved off her hair for one scene. All of this dedication, however, translated into a middling showing at the box office. Moore later said that the media reports "killed G.I. Jane before it ever even had a moment," according to Entertainment Weekly. Through her production company, Moving Pictures, Moore found more success as a producer of Austin Powers: International Man of Mystery (1997) and its sequels Austin Powers: The Spy Who Shagged Me (1999) and Austin Powers in Goldmember (2002).

Retreating from the Hollywood scene in 1998, Moore and her three daughters moved to Hailey, Idaho, where she and Willis had previously purchased a home. During her time in Hailey, Moore mostly focused on raising her daughters. She left her quiet small-town life to act in one film: the independent drama Passion of Mind (2000).

Moore's next big screen venture was heralded as her comeback. In Charlie's Angels 2: Full Throttle (2003), she played a villain named Madison Lee. Moore appeared opposite such younger talents as Drew Barrymore, Lucy Liu, and Cameron Diaz. "She's so lovely and so powerful. Here's a woman who has three children — she goes toe-to-toe with Cameron Diaz in a bikini. She's awesome. I just enjoy her performances and her gutsiness," said the film's director.

Around this time, Moore was also attracting a lot of media attention for her off-screen life as well. She began dating 25-year-old actor Ashton Kutcher, who is 15 years her junior. Tabloid press could not seem to get enough of this May-December romance, with some speculating whether their relationship was merely a publicity stunt. Moore and Kutcher proved their critics wrong when they married in September 2005 at their Beverly Hills home. Kutcher has become very close with Moore's daughters, who sometimes call him "MOD," which stands for "My Other Dad."

In recent years, Moore has worked on several films. She had a small, but dramatic role playing an alcoholic lounge singer in Emilio Estevez's Bobby (2006), which imagined the final hours of Robert Kennedy through the eyes of different people at the Los Angeles Ambassador Hotel. Her strong performance earned her a lot of critical praise. Moore followed up this success with the thriller Mr. Brooks (2007) with Kevin Costner. She played a detective pursuing a serial killer (Costner) in the film. She co-starred in the heist caper Flawless in 2008, which co-starred Michael Caine.

Moore continues to tackle an interesting mix of projects. She had a role in the independent family drama Happy Tears with Parker Posey, Rip Torn, and Ellen Barkin, which was screened at the Berlin Film Festival in February 2009. In the upcoming noir action film, Bunraku, Moore appears with Josh Hartnett and Ron Perlman. She also co-stars with David Duchovny in the offbeat drama The Joneses.